Catapulted into world fame by deeds of indescribable daring, three men have sworn to tread the path which all people fear... the dangerous road beyond the things we know! They call themselves... 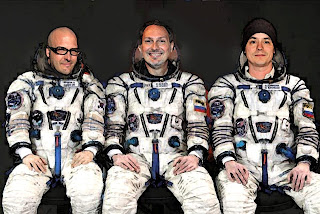 
In the winter of 2011, Marty Gordon, Tim Manthey and Craig van den Bosch began their friendship and artistic collaboration. Contemplations on the Dialectical Utopian Vision, a collage exhibition curated by van den Bosch at the Fremont Abbey Arts Center in Seattle initially introduced the three artists to one another and showcased Manthey and Gordon's first collaborative works of art.

Modeled after the Exquisite Corpse technique invented by the Surrealists around the early twentieth century, Gordon, Manthey and van den Bosch began work on three collaborative collage journals in August of 2011. Each artist initiated a journal, rotating it among one another at the end of each month. Full of surprise, laughter and sometimes disgust (it's Netter enough), these meetings became a source of friendship and inspiration that pushed each artist outside of their creative comfort zone. While managing to reach a collaborative compromise, the artists established a few ground rules agreeing that no image would be sacred, giving each other complete freedom to add to, cover over or even destroy one another’s work. Working within these parameters, Gordon, Manthey and van den Bosch finished the journals in February of 2012. No permanent injuries of a physical or psychological nature occurred to the artist ego, at least any that will be overtly claimed.

Finishing the original journal collaboration, the three began working on larger collage pieces. During this phase, an artist friend dubbed the three with the moniker Collagemonauts which seemed fitting given the themes and motifs that emerged naturally throughout their work; space, religion, indigenous people, and medical science. The Collagemonauts had their first show in September of 2012 and are seeking further opportunities for the future.